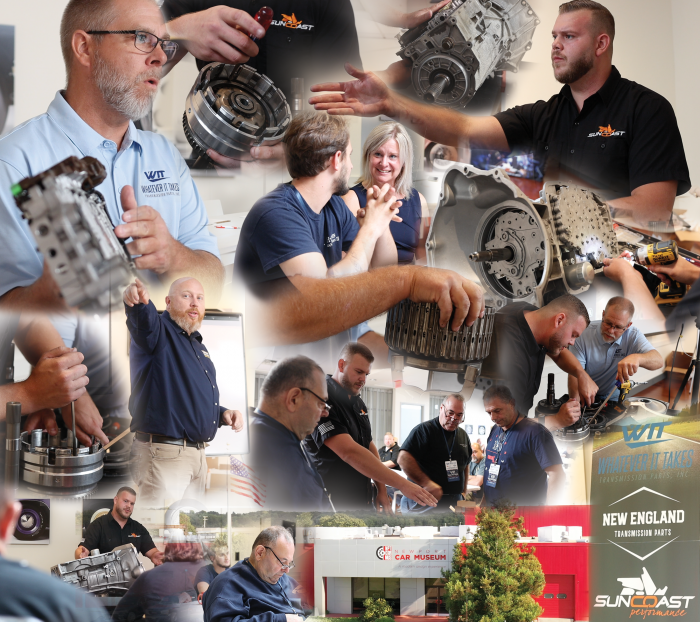 Whatever It Takes, in collaboration with New England Transmission Parts and SunCoast Performance, is excited to offer our second-annual Bob Smith Memorial Seminar, “The Future is InTENse: A Glimpse into the 10-Speed and Beyond.” This private training event will be held on October 8, 2022, at the Newport Car Museum in beautiful Newport, Rhode Island. This year’s event is held in memory of Robert “Bob” Smith, who loved everything about cars and was dedicated to educating and giving back to the industry he was so passionate to be part of.

Learn from the brightest minds in the transmission industry! Network with the greatest transmission and torque converter builders in the world! Prepare your brain for the latest technology and innovations! GROW. YOUR. BUSINESS.

This is an exclusive, invitation-only seminar focusing on what it takes to build a successful unit for both gas and diesel platforms. We will be reviewing data logs and current failures, along with measures for improving the upcoming plethora of 10-speed units coming in your near future. The upcoming 10-Speed platform is going to be a spectacular market to be a part of, as it is the future of our industry.

This Fall, New England Transmission Parts is offering classes geared toward providing insight into industry-leading research and development, along with numerous guest speakers from the automotive world bringing their knowledge to the table.

These courses allow participants the opportunity to learn everything from theory and function to design and principles of transmissions and torque converters. This highly-coveted seminar will arm you with all the knowledge you need to go back to your shop and help your business thrive!

By attending, you have the chance to win more than $5,000 in prizes, including $500 cash, multiple gift certificates, and one-of-a-kind signed sports memorabilia.

Additionally, SunCoast-sponsored racer Bobby Ducote from “Street Outlaws: No Prep Kings” will be in attendance signing autographs and taking photos, so this is an event not to be missed!

Learn from the following exciting keynote speakers in our classroom setting:

Randall came to Sonnax in 2012 with more than 40 years of automotive training, diagnostic and repair experiences in tow. Realizing a love of repairing things at a young age, 12-year old Randall went from fixing roller skates to skateboards to bicycles – not just for the area children but for their parents, as well. Randall began his professional career in 1975 at a Ford dealership, later working for ATRA from 1995 –2011. At Sonnax, Randall has spent the vast majority of his time crisscrossing the nation, training technicians one-on-one, both in valve body repair as well as technical building skills and procedures.

Randall and his loving wife, Donna, proudly boast a combined, blended family of five children, as well as nine grandchildren – who all “LOVE” drag racing. When he’s not expounding on the virtues of vacuum testing, Randall can be found indulging in some of his favorite hobbies of the outdoors, such as auto racing, fishing and hiking.

Robbie Ferguson started working in his Father’s transmission shop in Pensacola, FL, at the age of fourteen and has been in the industry ever since. He spent fourteen years working in a transmission shop, with duties ranging from sweeping the floors, R&R, rebuilding transmissions, diagnosing, to the role as General Manager. He worked for Alto Products Corp. for a total of thirteen years, eight years as a Technical Director and five as a VP of Sales. Robbie directed the High Performance, Motorcycle, and Marine product lines, as well as managed accounts in the Saudi/Australia/New Zealand regions, and oversaw new product development. He left Alto for an opportunity at Raybestos Powertrain in February 2018, where he currently works from his home in Atmore, AL, as a Regional Sales Manager.

Robbie has had the privilege of presenting technical seminars in over fifteen foreign countries. He still rebuilds transmissions in his garage at home and considers himself blessed to have made so many great friends over the years in the transmission industry. He is active in the Transmission Brotherhood, ATRA, ATSG, and TCRA. Robbie serves on the board for TCRA and the Atmore Soccer Assoc. and is a member of the Northview High School Quarterback Club and the Walnut Hill Ruritan Club. He earned his pilot’s license at the age of eighteen and has over 2,000 hours as pilot-in-command. He is married to his wife of nearly eighteen years and has a sixteen year old son.

In his spare time, he enjoys traveling with his family, attending his son’s high school football and basketball games, working on his farm, and tinkering on their 1973 Mach 1 with his son.

Manley Tate descends from an automotive family with his father having worked at GM/Delphi for 40 years. He is a degreed engineer from Purdue University and embarked on his own automotive journey starting at the Chrysler Transmission Plant in Kokomo, IN. He moved on to Raybestos where he served in various capacities, ending in his final role as Executive Vice President. There was a 3-year stint in between the Raybestos tenure, running a powder coating operation in Indiana.

After Raybestos, Manley moved to Omaha and served as Chief Operating Officer for Certified Transmission in 2014. In 2017, he joined the ranks of ownership with Dynamic Powertrain Reman located in Chicago, and continuing its rich history in the torque converter remanufacturing space.

Montana Cherry has a long history with SunCoast Performance predicating his tenure as an employee here and is currently in charge of employee production and development with SunCoast.

Montana started his relationship with SunCoast as a sponsored Team Driver, scoring a prolific number of wins in both the ODSS and NHRDA. Montana was well known for his proclivity of catostrophic destruction when racing for SunCoast. It was during this time that Montana was taken under the great Ernie Davis's tutelage, learning the ins and outs of rebuilding the very unit he so loved to destroy.

In 2017, Montana was brought on to the SunCoast team as a production builder, and it was not long before his talents secured his upward momentum with his career at SunCoast. Montana worked his way up to the top securing a senior position with not only SunCoast's research and development team but is now responsible for training, developing, and overseeing SunCoast production builders.

Blake Carter is currently a President of Sales and Marketing at SunCoast Performance where he has been employed since 2015.

After college, Blake transitioned into the administrative division with General Motors, serving as a Service Manager and Fixed Operations Director. It was here Blake discovered his fascination with software calibration and its relationship with vehicle performance as he watched the first and second generations of electronic torque management develop with vehicle manufacturers. During this time, Blake helped develop and market the GM Performance Parts division throughout the Southeast Division. It was during this time Blake developed his skills as a software calibrator, writing calibrations for aftermarket modifications done to both the engine and transmission.

In 2009, Blake followed his childhood dream and went to work for Performance Automotive and Transmission Center as an Engine Calibrator and Operations Director. Performance Automotive served as a full service racing shop that also manufactured torque converters and transmission components. During this time, Blake was able to develop his skills in software calibration with the new  LS2 and T43 6L80E platforms. He worked with other industry leaders developing and testing the first stand-alone 6L80E controller. This was also the first successful 6L80E stand alone controller in a COPO Camaro using GM LAN versus typical J1939 aftermarket communication. Blake was also responsible for the growth and development of the company's thriving racing platform.

In 2015, Blake had the opportunity to come to Fort Walton Beach to work for SunCoast Converters as President of Sales and Marketing. At SunCoast, Blake has witnessed the deficiencies within the aftermarket community with education in regards to high-performance rebuilds. At SunCoast Blake has worked to develop the SunCoast BI-Annual Research Laboratory.

Blake is the father of three boys and has been married to his college sweetheart Jennifer for 25 years.

For more information and to get on the exclusive invitation waiting list, please contact New England Transmission Parts at (401) 310-6387.

For your viewing pleasure, enjoy this recap of last year's seminar: