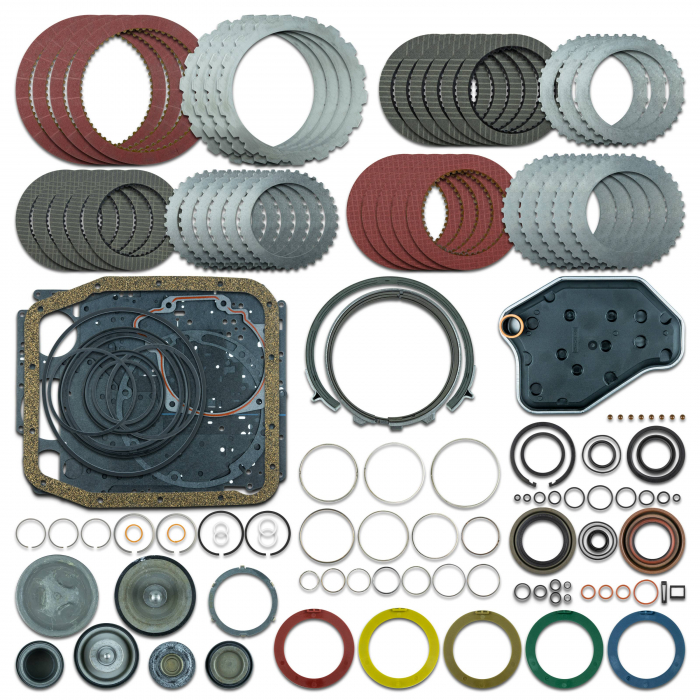 In 1962 Ford began working on a new type of automatic transmission that would emphasize fuel economy and drivability. The new transmission was built around the Ravigneaux Planetary Gearset of the "X" transmissions. Where many transmissions had a fourth gear added on as an afterthought, Ford's new transmission was designed with a fourth gear integrated into the gearset. Because it was based on the "X" transmissions, its gear ratios from 1-3 were the same with the fourth being 0.67:1. The transmission featured a split-torque application for third gear as well as a lockup in the torque converter. The XT-LOD was initially abandoned in 1966 but design began again in 1974 as a result of rising gas prices. The project was shelved with a design that lacked a damper in the torque converter but after the project was revisited a damper ultimately made its way into the final design. The transmission was introduced when Ford started to downsize its full-size line in 1979. Initially called XT-LOD (Extension Lock-Up Overdrive) its name was changed when revisited in 1974 to FIOD (Ford Integrated Overdrive) and then to its final name in 1979, the Ford AOD transmission.

A revised version of the AOD-E Transmission was released in 1993 with the Lincoln Mark VIII. Unlike the AOD-E, both 1st and 2nd gear ratios in the 4R70-W are numerically higher, giving the transmission a better mechanical advantage and in turn, better take-off acceleration, slightly lower fuel consumption, and designed for better gearset strength. On vehicles powered by the 5.4L V8, a stronger gearset is used than in normal duty 4R70Ws. In 1998, due to durability concerns, the intermediate one-way roller clutch was replaced with a mechanical diode providing extra holding capacity and longer service.

While there is some speculation that the 70 can be multiplied by 10 to indicate the ft-lb of torque this transmission is capable of handling including torque converter multiplication, (i.e. 700 ft-lb of torque), there is no reliable source indicating this. In fact, a Ford document stated that the 2003 "Expedition's 4R70W transmission is rated to handle up to 506 foot-pounds of torque, which provides a large performance cushion beyond the peak torque rating of Expedition's largest available engine." It is more plausible that the number indicates the torque handling capability in N-m, as 506lb-ft converts to 686 N-m which could be rounded to 700 N-m. The "70" may also refer to the transmission's torque capacity after torque converter multiplication which occurs at low rpm's when the torque converter is more "elastic". 4R70W indicates 4 gears, Rear wheel drive and Wider gear ratio compared to the AODE.

Raybestos Powertrain GPZ friction plates greatly increase transmission performance and durability. This state-of-the-art friction material far exceeds OE material to withstand high stress, high temperatures and repeated cycling. GPZ's outstanding performance. Raybestos Stage-1 Performance frictions are an affordable solution for performance applications that may not require the capacity of the Gen2 Blue Plate Special, but do require a friction plate that can handle the demands that a stock tan or high energy plate. benefits are perfect for heavy-duty vehicles and high-stress driving. Testing of GPZ revolutionary friction material shows that it outperforms OE materials by as much as 20%. Plus, its performance improves as the power increases.