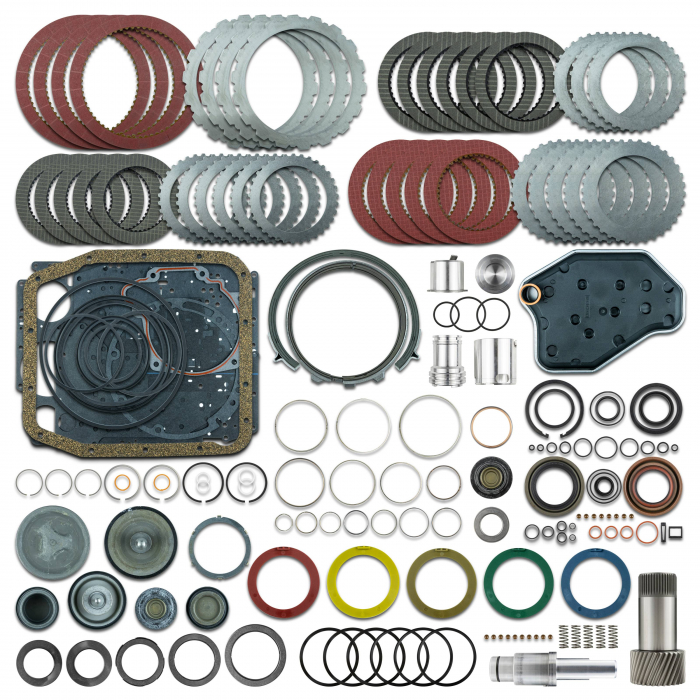 In 1962 Ford began working on a new type of automatic transmission that would emphasize fuel economy and drivability. The new transmission was built around the Ravigneaux Planetary Gearset of the "X" transmissions. Where many transmissions had a fourth gear added on as an afterthought, Ford's new transmission was designed with a fourth gear integrated into the gearset. Because it was based on the "X" transmissions, its gear ratios from 1-3 were the same with the fourth being 0.67:1. The transmission featured a split-torque application for third gear as well as a lockup in the torque converter. The XT-LOD was initially abandoned in 1966 but design began again in 1974 as a result of rising gas prices. The project was shelved with a design that lacked a dampener in the torque converter but after the project was revisited a dampener ultimately made its way into the final design. The transmission was introduced when Ford started to downsize its full-size line in 1979. Initially called XT-LOD (Extension Lock-Up Overdrive) its name was changed when revisited in 1974 to FIOD (Ford Integrated Overdrive) and then to its final name in 1979, the Ford AOD transmission.

A revised version of the AOD-E Transmission was released in 1993 with the Lincoln Mark VIII. Unlike the AOD-E, both 1st and 2nd gear ratios in the 4R70-W are numerically higher, giving the transmission a better mechanical advantage and in turn, better take-off acceleration, slightly lower fuel consumption, and designed for better gearset strength. On vehicles powered by the 5.4L V8, a stronger gearset is used than in normal duty 4R70Ws. In 1998, due to durability concerns, the intermediate one-way roller clutch was replaced with a mechanical diode providing extra holding capacity and longer service.

While there is some speculation that the 70 can be multiplied by 10 to indicate the ft-lb of torque this transmission is capable of handling including torque converter multiplication, (i.e. 700 ft-lb of torque), there is no reliable source indicating this. In fact, a Ford document stated that the 2003 "Expedition's 4R70W transmission is rated to handle up to 506 foot-pounds of torque, which provides a large performance cushion beyond the peak torque rating of Expedition's largest available engine." It is more plausible that the number indicates the torque handling capability in N-m, as 506lb-ft converts to 686 N-m which could be rounded to 700 N-m. The "70" may also refer to the transmission's torque capacity after torque converter multiplication which occurs at low rpm's when the torque converter is more "elastic". 4R70W indicates 4 gears, Rear wheel drive and Wider gear ratio compared to the AODE.

Raybestos Powertrain GPZ friction plates greatly increase transmission performance and durability. This state-of-the-art friction material far exceeds OE material to withstand high stress, high temperatures and repeated cycling. GPZ's outstanding performance. Raybestos Stage-1 Performance frictions are an affordable solution for performance applications that may not require the capacity of the Gen2 Blue Plate Special, but do require a friction plate that can handle the demands that a stock tan or high energy plate. benefits are perfect for heavy-duty vehicles and high-stress driving. Testing of GPZ revolutionary friction material shows that it outperforms OE materials by as much as 20%. Plus, its performance improves as the power increases.

This upgraded spiral retaining ring kit 76554RK incorporates a spiral snap ring that is staked to a locking ring to ensure ring contact with groove during high-rpm conditions, eliminating blowout. This works in roller clutch or mechanical diode applications.

It can be difficult to establish the proper clearance between the converter hub and bushing in listed Ford units because aftermarket drop-in replacement bushings are not thick enough. Sonnax pump bushing 36002-01 is a finish-in-place front pump bushing.

Sonnax heavy duty forward sun gear 76612A-01 is a direct replacement for all 31-tooth sun gears used in 2.84/1.55 ratio gear sets. Manufactured from 9310 alloy steel, this gear is significantly tougher and stronger than OE or other aftermarket sun gears and is the perfect option for demanding applications. This is the same sun gear included with Sonnax Smart-Tech® direct drum and shaft kit 76656-01K that combines high-strength direct drum with integrated intermediate stub shaft.

Ford Vehicles equipped with 4R70W and AODE units may suffer delayed engagements and burnt forward clutches due to low line pressure. This can be even more pronounced in heavy-duty or performance vehicles. Installing Sonnax elevated pressure main pressure regulator spring 76948-06 eliminates these concerns by raising base line pressure to securely engage clutches.

Sonnax 76836A 2-3 accumulator piston is a direct OE replacement. The bonded rubber piston seals will prevent leakage between the piston O.D. and the case bore. This piston assembly is used in AOD-E and 4R70W transmissions.

Common complaints in Ford AODE and 4R70 series transmissions are delayed Forward engagement and harsh 1-2 shifts caused by the 1-2 accumulator bore in the case being worn or scored. This wear results in the loss of 2nd clutch pressure and the need to replace the case. Sonnax 1-2 accumulator sleeve kit 76890-01K salvages expensive cases and restores the 1-2 shift.