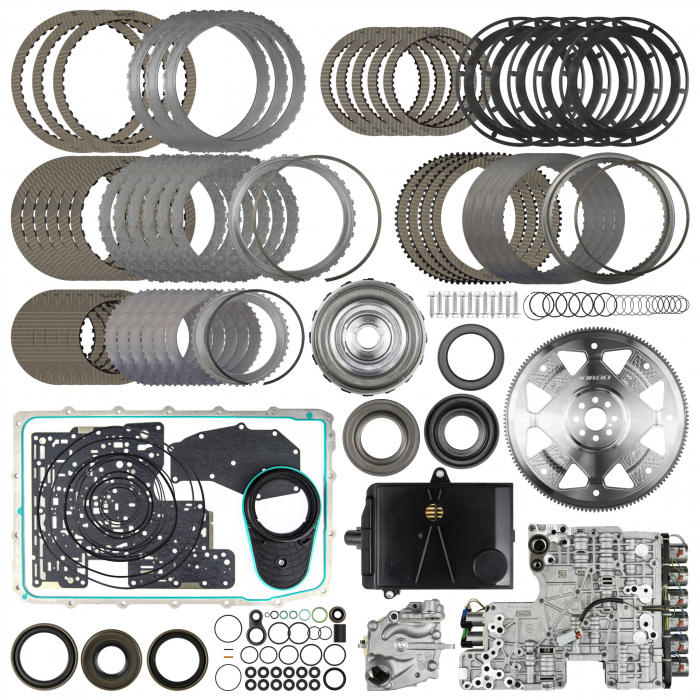 To create this optimal blend of performance and efficiency, the 10R80 transmission has a wide 7.39 gear ratio spread and a low 4.70 first gear for maximum performance off the line. Even though this Ford 10-speed automatic transmission has such a wide gear ratio, it has extremely small steps between the gears. This means the engine RPM only drops (approximately) 20% with each shift, which keeps the engine in the ideal RPM range to achieve either peak performance or efficiency (much like a CVT transmission). The Ford 10R80 also has three overdrive gears, which it can downshift from very quickly.

With the SunCoast 10R80 Pro Loc valve body, we are addressing several key issues we have seen in regard to the 10R80 transmissions. This is not an approach that is simply bumping in more line pressure in hopes of ascertaining more clamping force; it’s a multi-faceted approach addressing several key issues when exposing these units to more demanding driving environments. These range from heavy towing and hauling to street racing and drag racing.

The factory 10R80 transmission lock-up circuit is an impressive one, in that it can make converter lockup seem somewhat uneventful. The refinement in its engagement is definitely next-level to what we have seen in the past. As nice as this feels in reference to the NVH (Noise Vibration Harshness), when we start introducing situations where the load demands are testing the limits or outside what the vehicle was initially designed for, it can become a huge problem.

In our SunCoast 10R80 Pro Loc Valve Body we are specifically looking to decrease the time from initial lock-up apply to zero turbine slip. In doing this, we are changing the lockup circuit by replacing the torque converter clutch (TCC) valve in order to increase lockup holding apply fluid pressure. The lockup oil transition time is also improved by modifying critical oiling circuits for the fluid to reach the TCC clutch, resulting in quicker apply time, and therefore, reducing TCC clutch degradation. By reducing degradation per apply cycle, we are allowing for improved reliability and performance.

(NOTE: For maximum results in power levels exceeding 800HP, it is highly recommended that the TCC apply offset be changed in the factory file calibration)

The next facet we address is the lube circuit. The lube circuit on the 10R80 transmission is responsible for supplying oil to the planets, clutches, bushings, etc. From the factory, the lube circuit oil is dispersed throughout the transmission as low as 6 PSI. Under normal load demands, this is perfectly acceptable. In more stressful and demanding situations, an increase in lubrication to clutches, steels, planets is ideal for removing heat and dealing with the increased demands.

In our 10R80 Valve Body we are specifically addressing this circuit from 6 PSI to a whopping 20 PSI. This is a 250% improvement from the factory calibration, resulting in reduced frictional heat generated. This reduction in heat helps lessen pre-mature failure that can become increasingly evident in high horsepower applications.

Another modification to our SunCoast Pro Loc 10R80 Valve Body involves the regulator valve (latch valve) circuit. This oil circuit is responsible for fully engaging the clutches, allowing for full clutch line pressure. In factory form, the regulator valve we are specifically targeting is responsible for A, B, C, and F clutch packs. Of course, our primary clutch pack concern is the 'F" clutch, which tends to be the first and most prominent clutch pack failure with the 10R80 in higher horsepower or more demanding environments.

In a factory 10R80 valve body calibration, the regulator valve (latch valve) becomes fully engaged, allowing full fluid flow for engagement at 120 psi. When this occurs, the oncoming clutch pack has maximal clamping force. When the clamping force is engaged to max capacity, we ascertain the greatest static and dynamic holding capacity. In stock form or even mildly modified vehicles, this is perfectly suitable; however, when we expose the vehicle to a more demanding environment this can be a weak link.

With our SunCoast 10R80 Valve Body we are decreasing the required pressure to fully engage the regulator to only 80psi. This is a 33% decrease in pressure needed to maximally engage the clutch regulator valve (latch valve) resulting in a quicker shift apply when engaging clutches A, B, C and F. This quicker engagement not only shortens shift times, but it also decreases the heat resonating in the clutch pack, preventing premature degradation and extending clutch life. To improve this shift calibration even more SunCoast is evacuating non-critical oil to increase apply rate.

The factory overall line pressure is modified on this new SunCoast pump/valve body combo. SunCoast is increasing overall main line pressure as much as 60psi. This additional line pressure not only increases maximal clamping force of the individual clutch packs but increases overall pump volume production. To reduce the potential for runaway pressure and the over-compression of clutch fibers, the SunCoast 10R80 Valve Body does have a built-in bypass, dumping excessive pressure above 420psi.

The new 10-speed platform that resides in the Coyote-powered vehicles, is nothing short of spectacular. Ford has blessed us with a plethora of gears that allow this new Coyote engine to stay exactly where it shines, singing right up top.

It goes without saying that it just seems inherent to human nature not to push what the manufacturer has so graciously given us. As with anything else, if you make it, we find a way to break it.

SunCoast is proud to bring to you our new billet 10R80 one-piece solid flexplate. This new 10r80 flexplate is manufactured from 4140 forged billet steel. It features a solid one-piece design with an integrated ring gear that has been heat-treated and oil-quenched for years of reliable service.

SunCoast has also designed this 10R80 flexplate with twice the bolt holes, allowing you to take advantage of the additional clamping opportunities that come with our SunCoast 10R80 Pro-Loc Bolt-together Converter. These additional clamping points not only ensure zero deflection, but also reduce the chance of shearing in high horsepower applications.